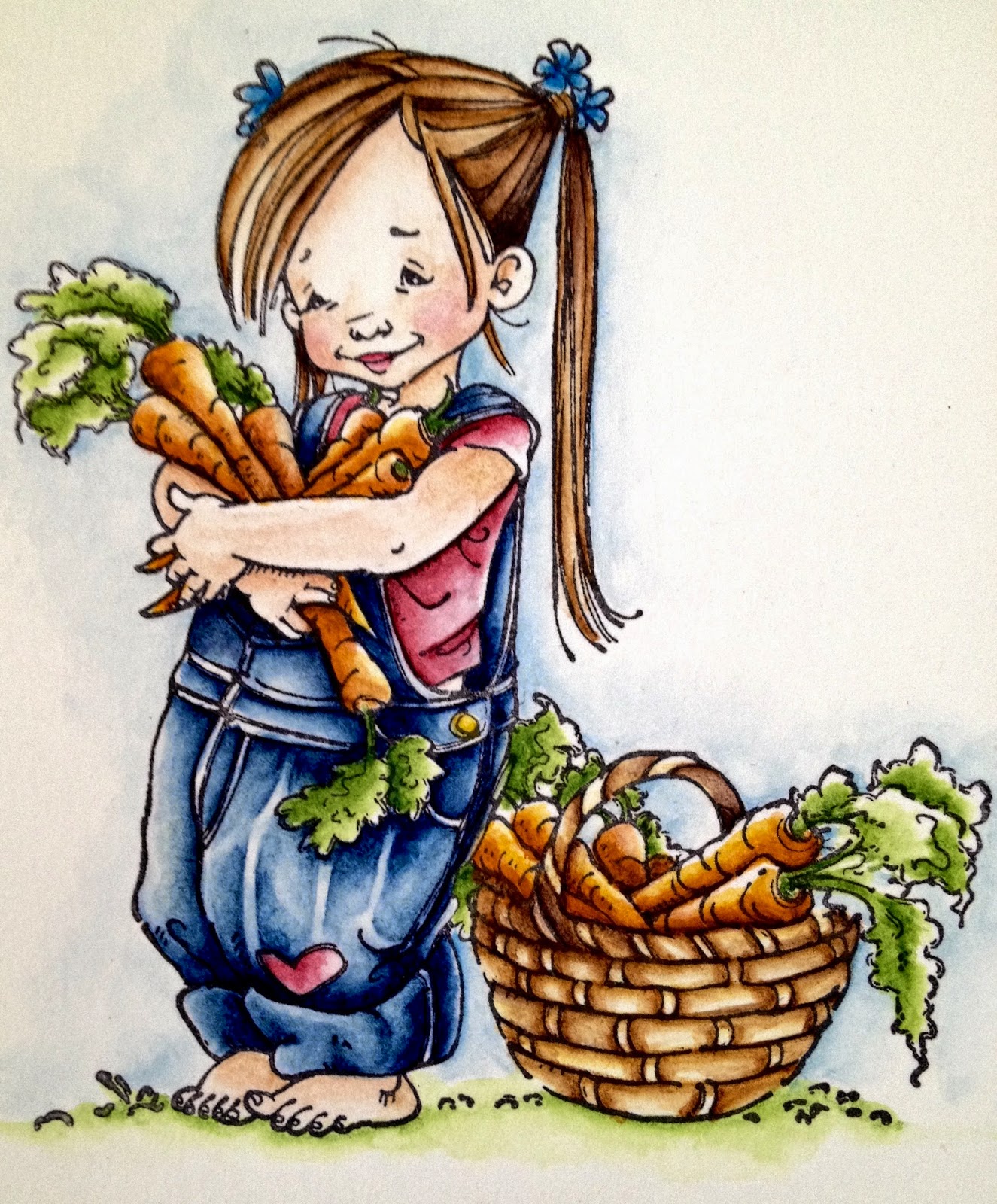 I coloured this lovely image "Penny Black's Carrot Collector" with my Derwent Inktense Pencil crayons!  I think she has lots of carrots for the Easter Bunny!!

Happy Easter everyone!!
Posted by Lori at 11:16 AM No comments:

Good morning everyone!! I have a card class coming up next week at Scrappin' Great Deals!! Join me for an informative, hands-on card class, with focus being on using Derwent Inktense Pencils! This card class is geared towards card makers that have already mastered the basic skills of using Derwent Inktense Pencils. I used two lovely stamps, one Stamping Bella image and one from Stampendous - and turned them into "XOXO" themed cards....perfect for Valentine's perhaps?!?! 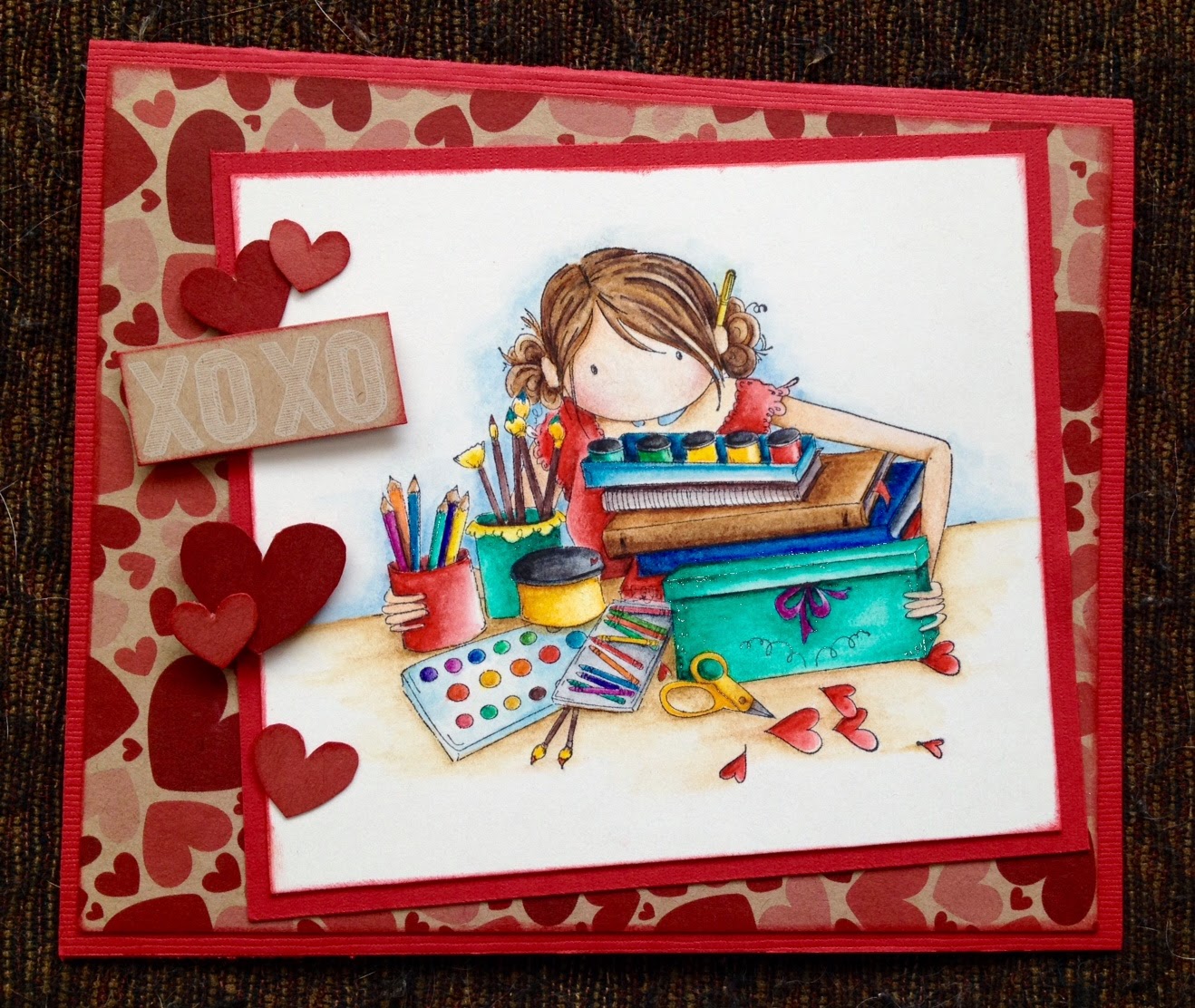 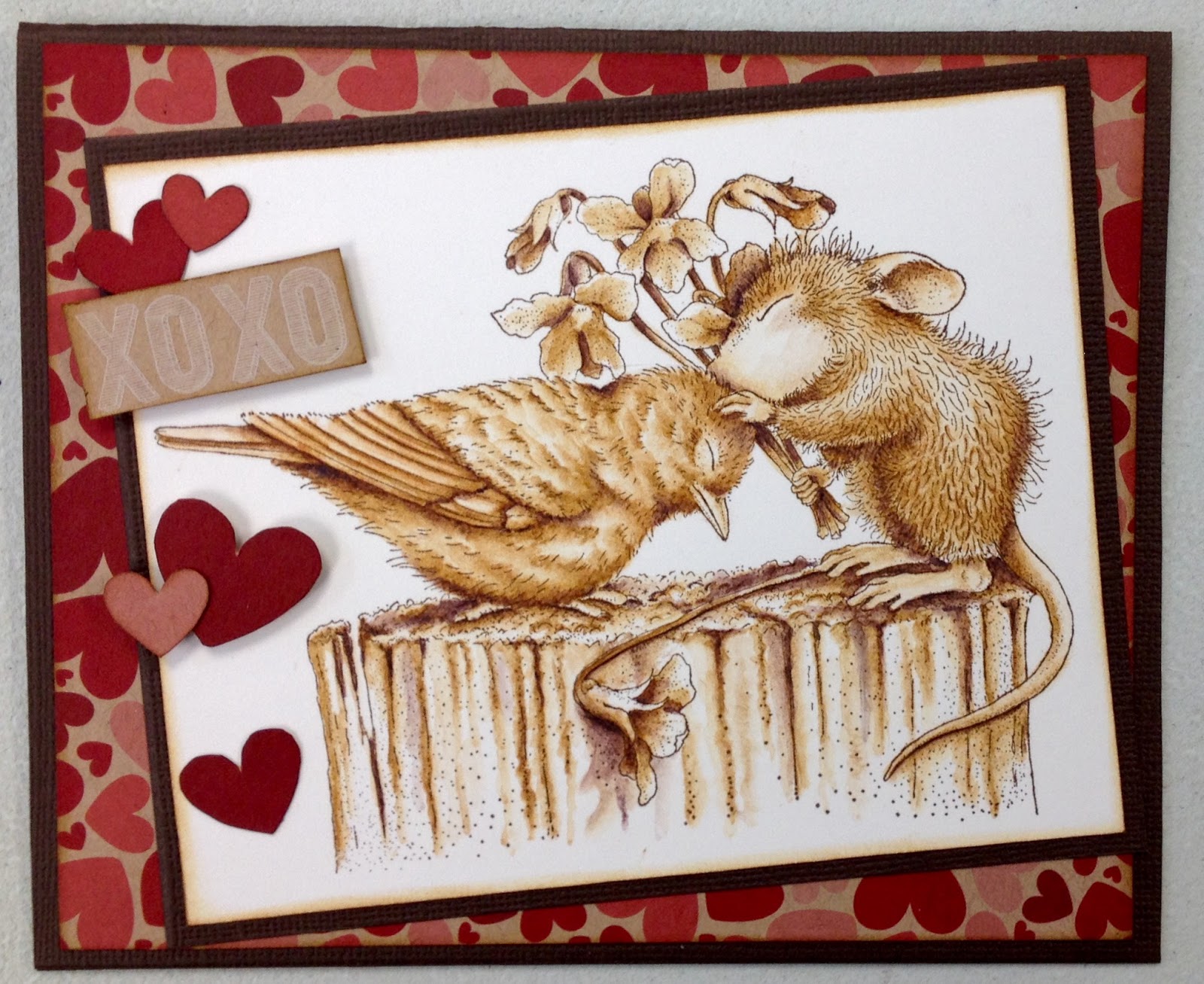 Students are asked to bring their water brush and Derwent Inktense Pencils with them to class. You will also need adhesives (liquid, 3D, etc.) and fine-tipped scissors. Each student will receive a 15% in-store discount during the workshop.
Click here to register:
Monday, January 19: 10:30am - 1:00pm Intermediate - Advance Level Class
I am going to schedule a weekend class as well for those of you who are interested and unable to attend during the week.  Thanks so much!
Posted by Lori at 10:14 AM No comments: 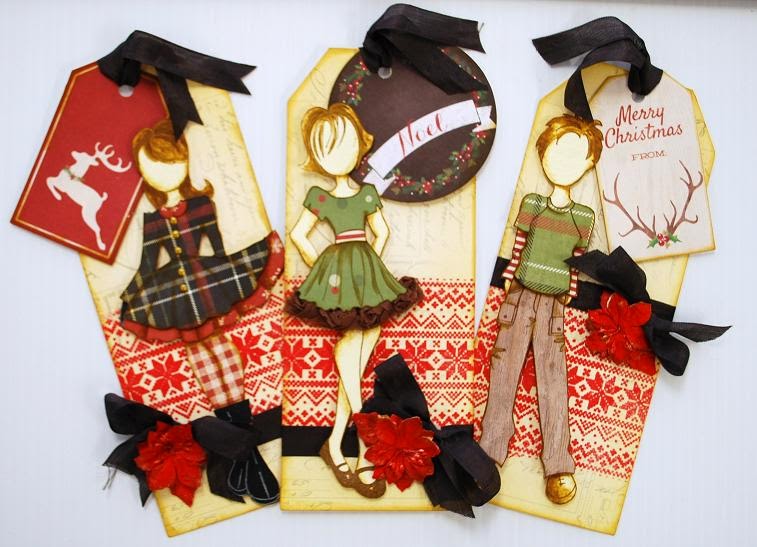 Wow ... It's so hard to believe it was seven years ago we turned our on-line store into a fabulous retail store!! All together we've been in business for 12 years!! Through these years we have met so many wonderful people and have formed many life-long friendships. For seven years we have been in our 3400 sq.ft. haven of crafting supplies. We have seen many changes in techniques and products used and are always excited to get the newest gadgets in our hands. We truly are as passionate about our hobby as you are and we plan to continue to grow & learn to be the best we can be!! Thanks for coming along for the ride ... now it's time to celebrate!! Join our talented Divas, Kim, Lori & Lynn, and create these gorgeous Prima Doll Tags!! You will be working with a variety of mediums, while learning helpful tips & techniques that can be applied for all of your crafting projects. All you need to bring are your fine-tipped scissors, liquid adhesive (such as Tombow) and 3D foam squares. If you have one, please bring a Craft Nib Holder (for your own personal use), otherwise some will be available for sharing. Everything else will be provided for you!!

Each registered student will receive a FREE 6x6 paper pad. You will be using a few sheets from your paper pad to create your tags and then you can take your paper pad home to re-create even more tags & projects! As a registered participant, you will also receive a BONUS GIFT FROM US!! There will be yummy treats and in-store specials too!! Seats are going quickly, so get yourself registered and get ready for a fabulous crafting celebration with our Divas on our 7th Anniversary of having our retail store!!

If you are not registered for our Prima Doll craft, please still come and join us for cake & fabulous in-store specials!! TOY DRIVE RAFFLE TABLE! Bring an unwrapped toy(s) for our annual Toy Drive and receive a FREE raffle ticket for where you could win FABULOUS prizes including a Grand Calibur Machine!! Let's see how many toys we can collect and make sure every child has a gift this Christmas! See you December 6th - Doors open at 9am!!
REGISTER TODAY:
Saturday, December 6: 9am - 12 noon
Posted by Lori at 12:51 PM No comments:

Good morning everyone!!!  Today I am sharing a card that you can make if you attend Scrappin' Great Deals' National Card Making Day Event!!!  It is one of four cards you will be making! 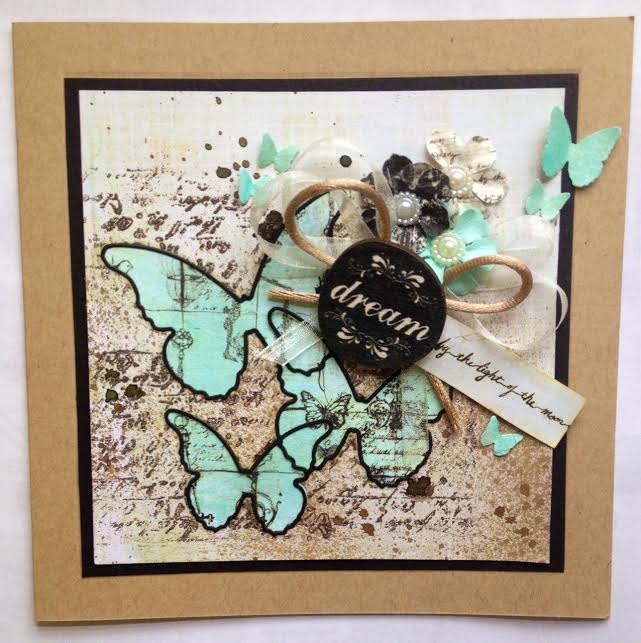 Every participant will be receiving a brand new 6x6 paper pad from the Prima Epiphany line! Stunning paper!  You will use paper from the pad to create the 4 cards and you will have lots left to recreate the cards or make others!!

For my card I used both the Memory Box Floating Butterfly Die, and the Floating Butterfly Background Die, Prima flowers and wood icons, ribbon plus some techniques using Prima Colour Bloom sprays, Lindy Stamp Gang sprays, embossing powder, stamping, punching....
I hope you can join us!!  National Card Making Day is Saturday, October 4, and the event runs from 10am - 2pm!!  Registration is required!!!  For more details and to register online, click this link!!
Posted by Lori at 9:28 AM 1 comment: 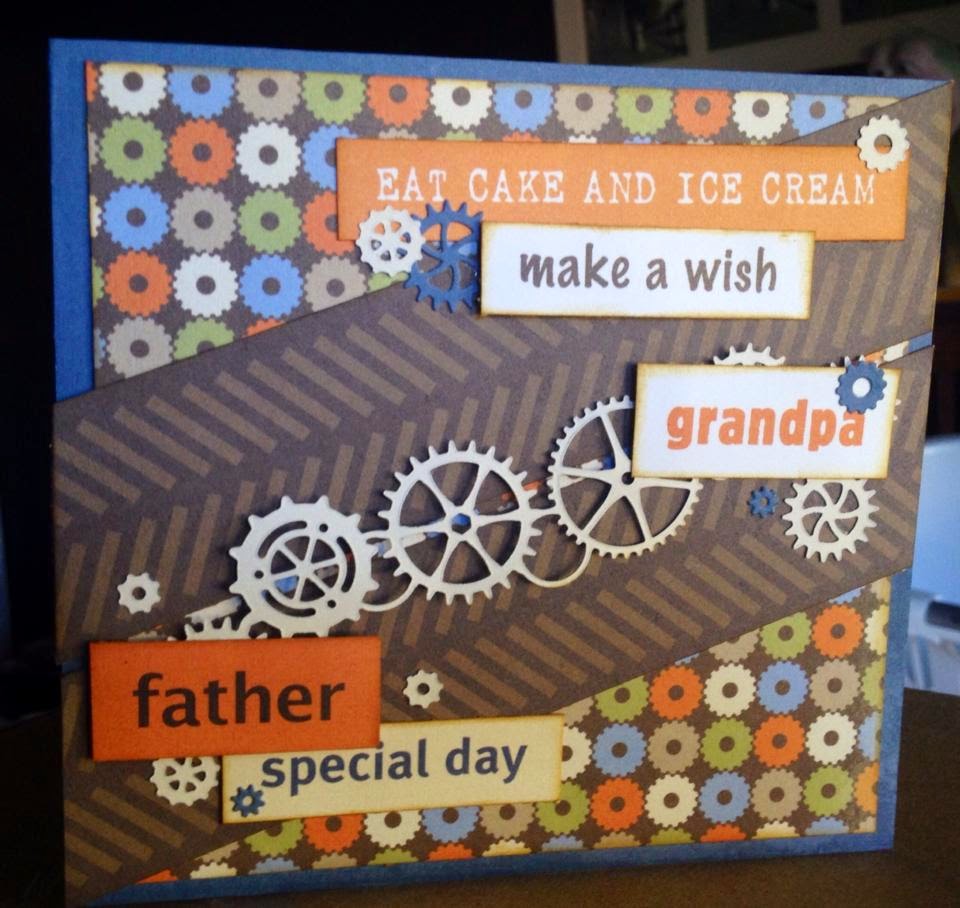 Here is a birthday card I made for my FIL using the line Gear Head by Paper Loft!  Love the masculine colours, shapes!!  I used a couple of Memory Box Gear Dies, (from Scrappin' Great Deals!) as well to continue the theme!

Happy Wednesday!!
Posted by Lori at 9:04 AM No comments:

Welcome to the CardMaker and The Paper Loft Blog Hop!

Today the CardMaker Designers and The Paper Loft Designers will be showing you some wonderful projects featuring papers from The Paper Loft. Thank you for joining us on the hop!! If you are following along, you should have arrived from the oh so creative Noelle McAdams blog!

Here is my card, featuring papers from the Truly Scrumptious line. The sentiment is from the Gear Head accessory sheet Enjoy Life...love those sheets! 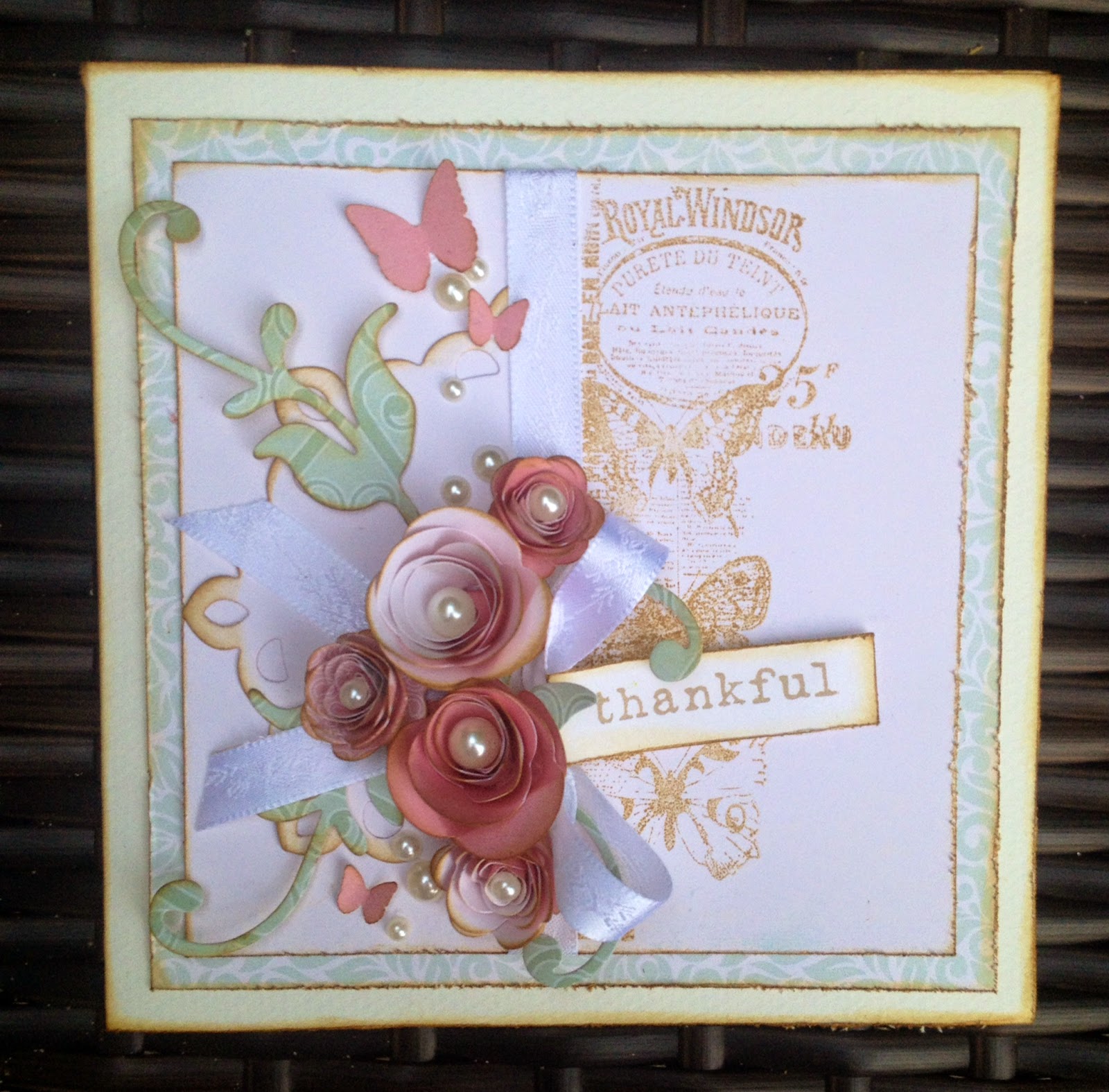 I used the 3D flowers Sizzix die for the flowers, the MFT flourish vine die for the foliage, a Kaiser Craft Stamp, Prima pearls, and a Spellbinders Fleur de Lis die. All the edges were distressed and brushed with Brushed Corduroy Distress Ink for a vintage feel. 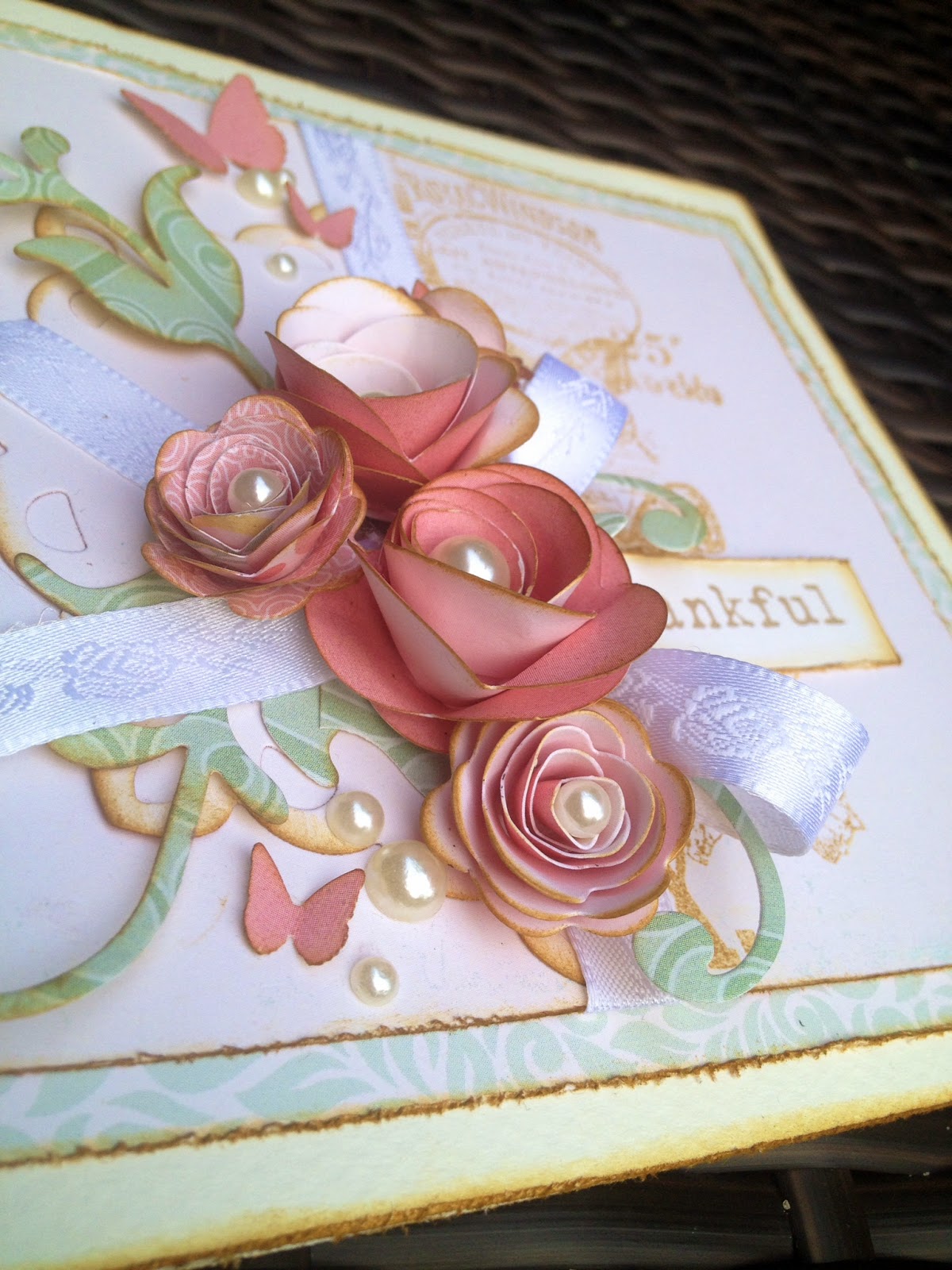 The very talented Mae Nazareth is next on the hop!!! Thank you so much for popping in and leaving me a comment!! Good luck!!!

Have you heard that Cari Fennell, Prima Educator is coming to teach several workshops at Scrappin' Great Deals, the weekend of September 19 & 20th!! We can't wait!! 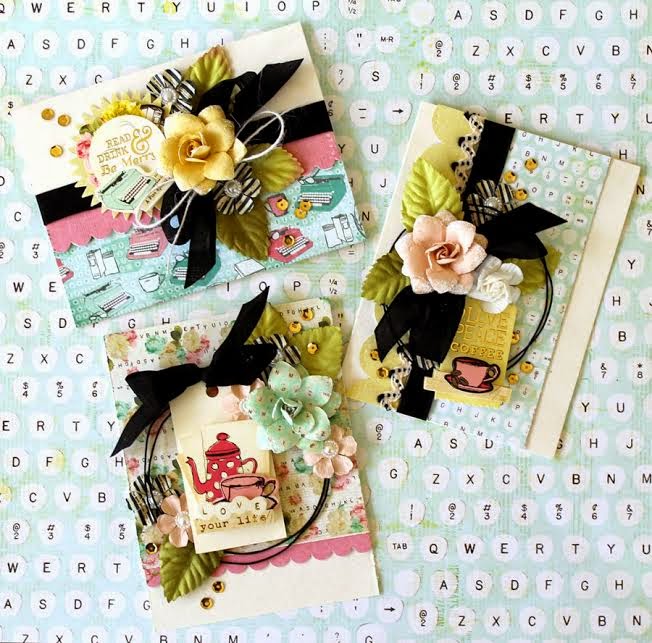 Above are 3 of the 6 cards that you will make should you be taking the Friday night workshop! There are only a few spots left for this particular workshop so if you are interested, please register online by following this link!! (REGISTER here) These cards use the new Coffee Break Collection by Prima!!

There are other workshops to choose from this weekend as well:
Family Double Page Layout 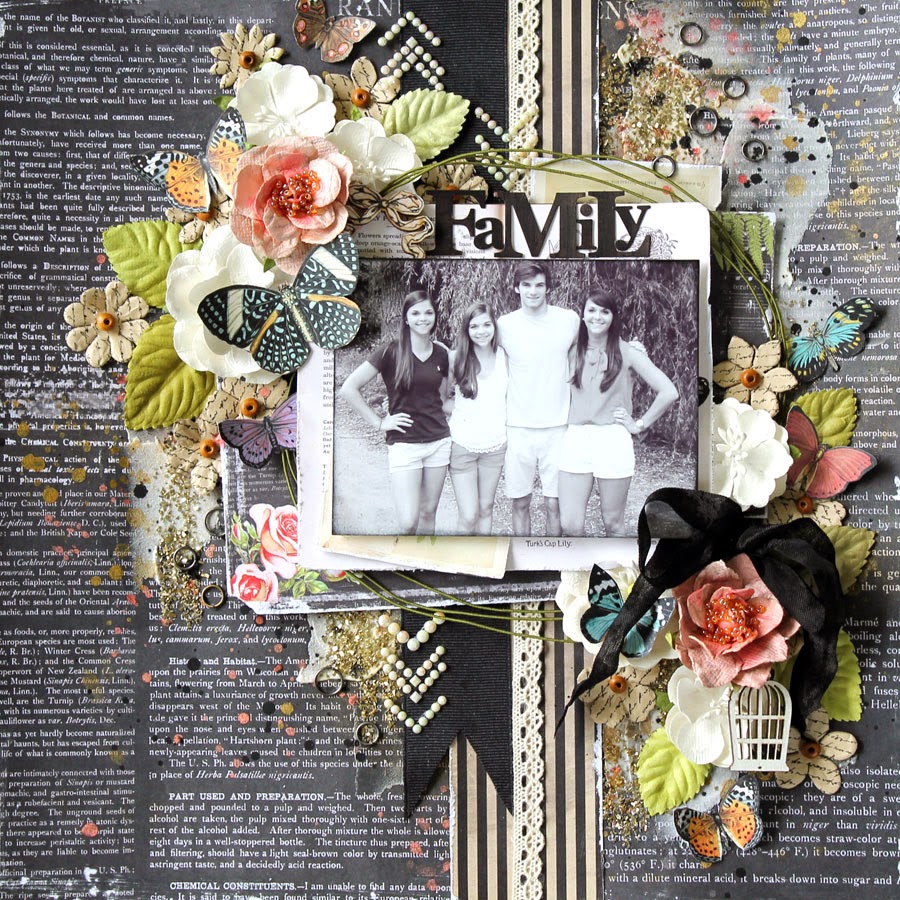 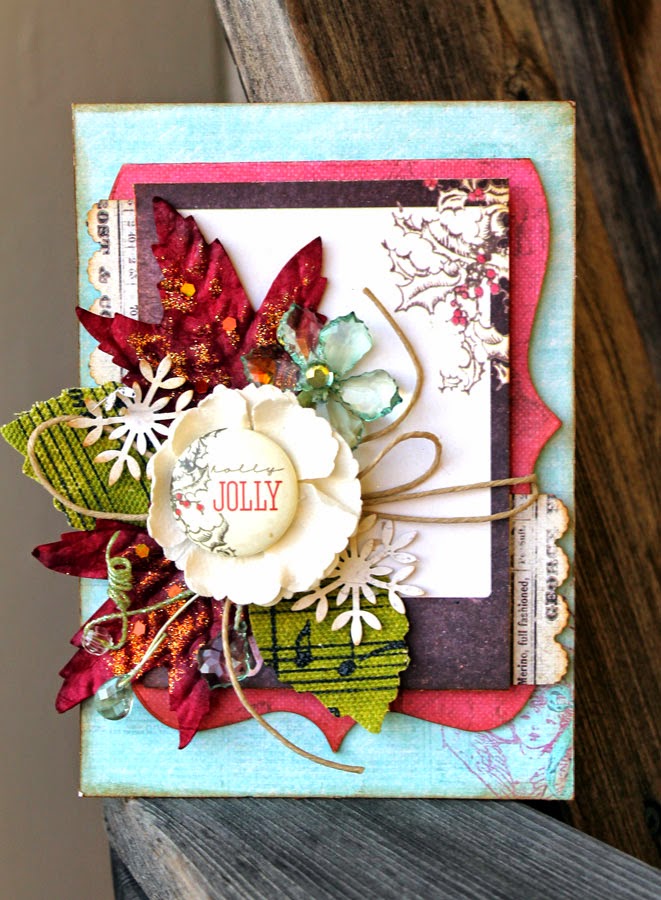 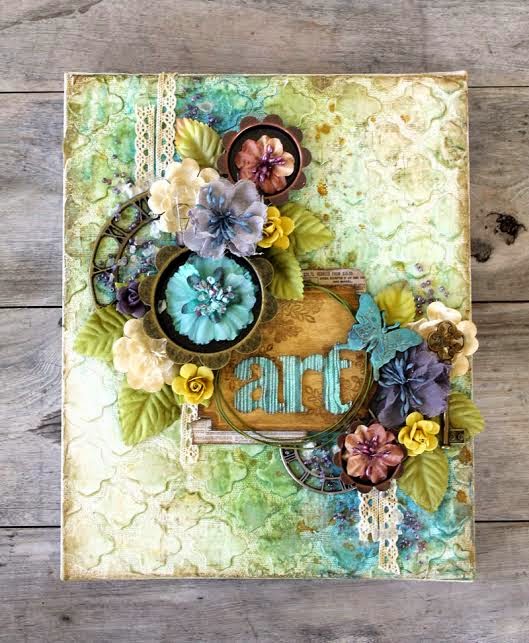 We hope you can join us for part of the weekend if not for all!!  Door prizes, treats and amazing classes!!
Posted by Lori at 10:16 AM No comments:

Good morning, Well I am starting Monday off right with a fun blog post! I'm excited to be a part of the Creative Blog Tour. Big Thank you to my lovely friend LYNN for asking me to join in. If you haven't already, make sure to check out her blog too!!!  She is terribly talented!!

I am a scrapbooker!! I typically only make layouts but do love creating altered objects when time permits!! Once in a while I will even make a card!! I have been crafting most of my life but I was introduced to scrapbooking in 2001. I scoffed at first but it didn't take me long to be hooked!! My style has developed over the years and has settled into a kind of shabby chic, artistic blend. I love distressing and inking on my layouts, mixed media, stamping, white space makes me nervous!! I love most of what Tim Holtz & Ranger have developed. I can't say there are any companies that don't have something I like, but I do tend to gravitate towards Fancy Pants, 7 Gypsies, Prima & Bo-bunny, Graphic 45 and Glitz Design.  I work full time as a landscape designer as well as part time at the best store ever... Scrappin' Great Deals. I am also fortunate to be on the design team for The Paper Loft. (Love their products!!) 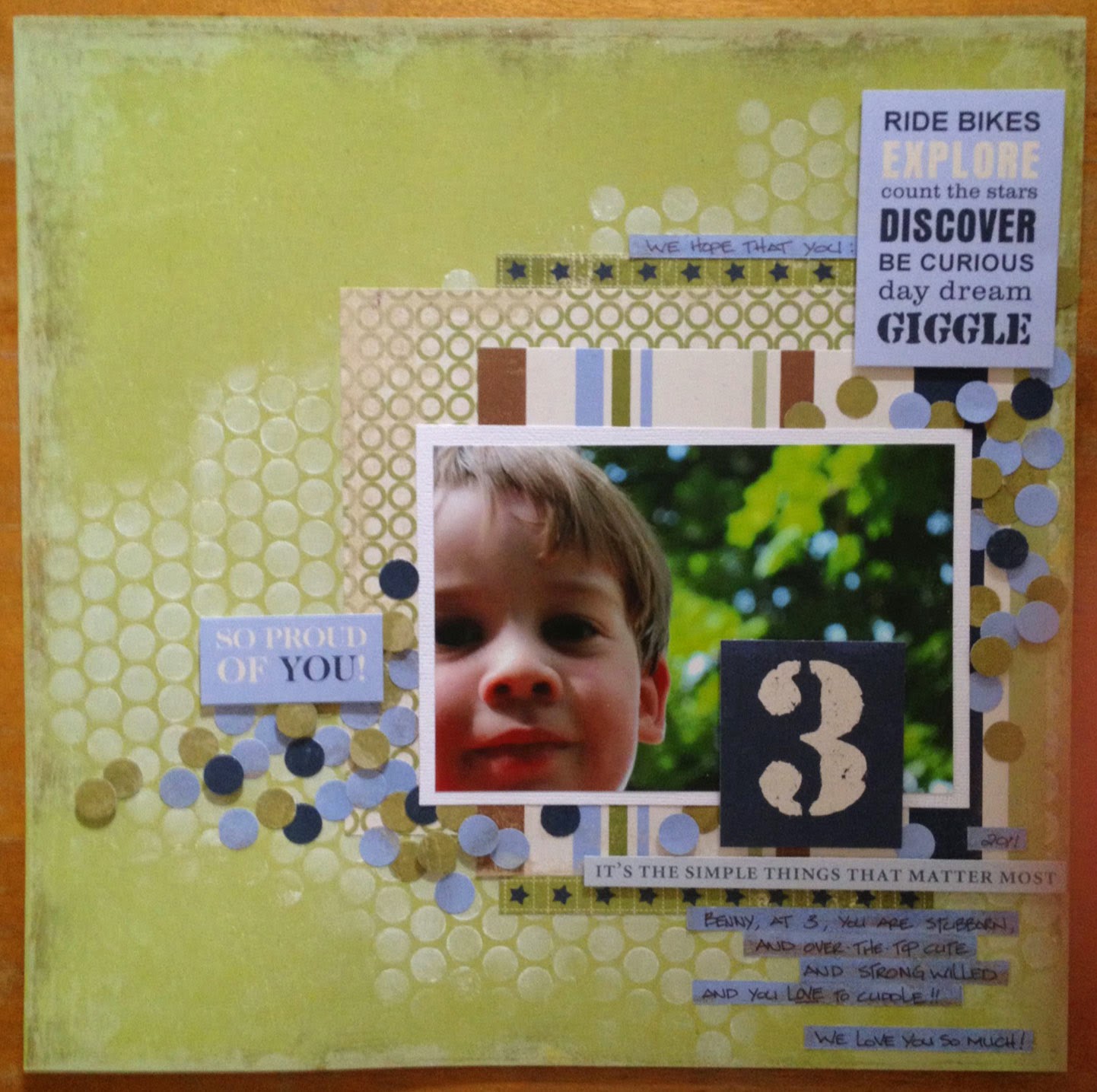 I also love to colour with Derwent Inktense Pencil Crayons!! Love the depth & the intensity you can achieve with them. 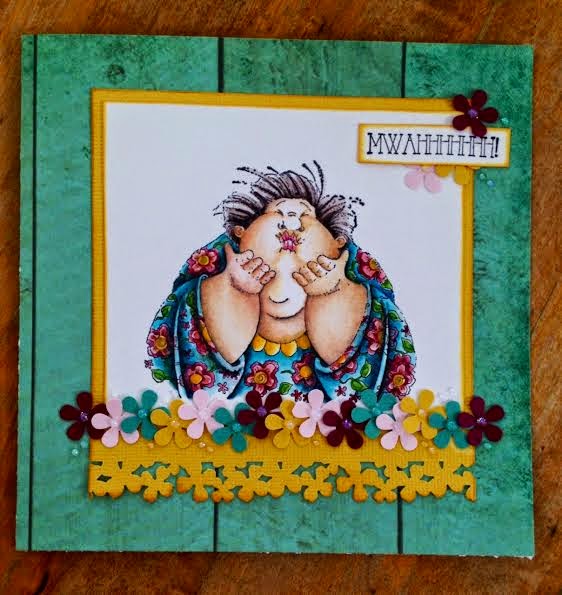 Here is a mixed media canvas: 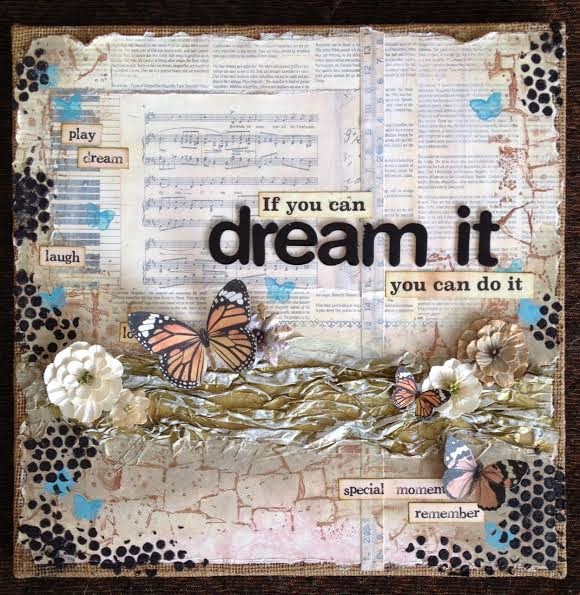 I also teach a monthly Art Journalling class with my friend Kim: 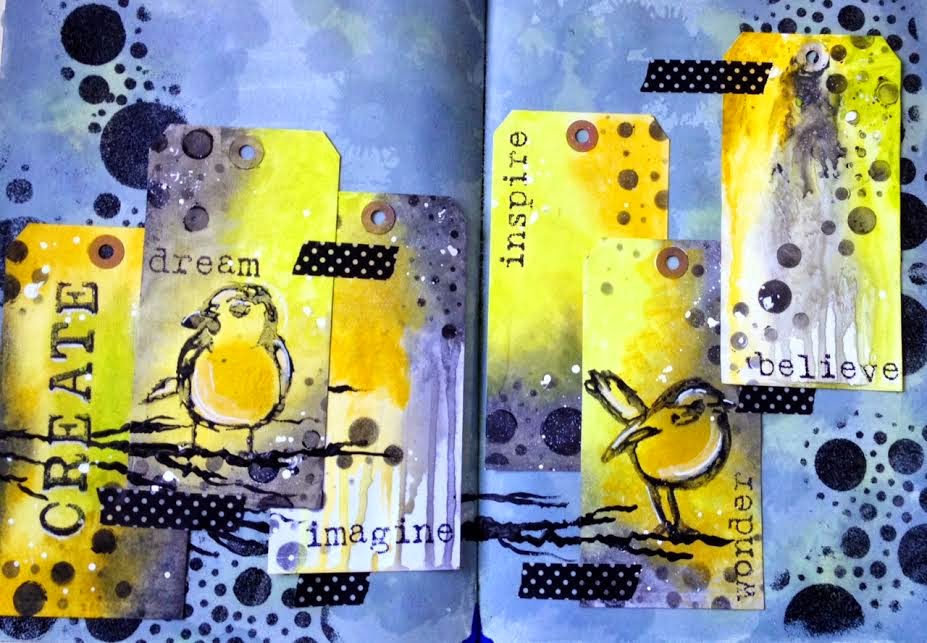 Shakin' the dust off!!

Wow, it is have been awhile since I updated my blog!!!  I have been keeping busy doing my landscape design work but I have managed to do some art journalling.  I have a class coming up this Friday night, and we are using Gelatos! 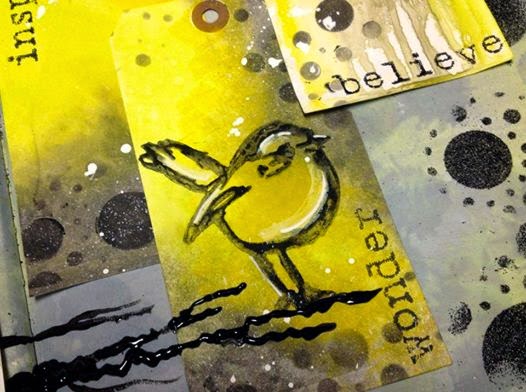 Pretty happy with how it is turning out!! I will try to post more!! Have a fantastic day!
Posted by Lori at 9:31 AM No comments: 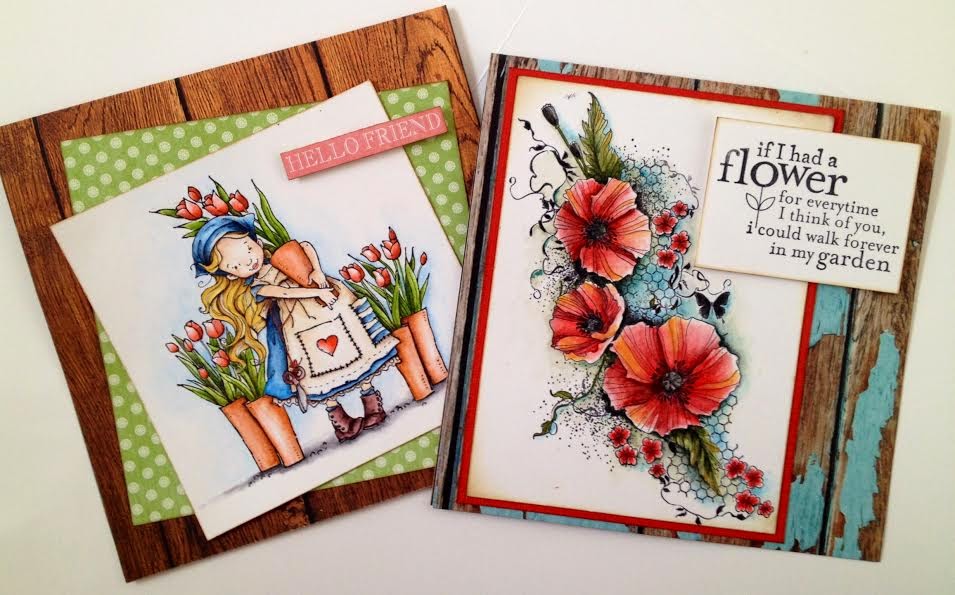 Good morning!!  Even though we haven't seen a glimpse of it outside, I am thinking SPRING!!!  Here are my two cards for my upcoming card class at Scrappin' Great Deals, this Saturday. I used Derwent Inktense Pencil Crayons.  Absolutely love the intensity of colour you can acheive!!  Here is a close up of the Penny Black stamp "Tulips for You": 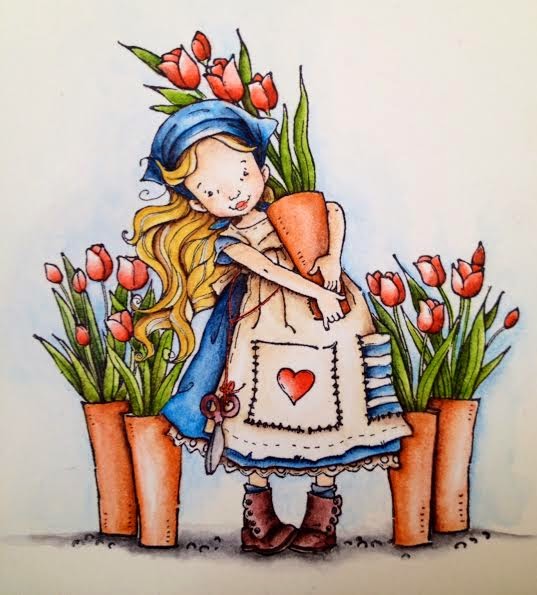 There are still a couple spots available in the afternoon class and I am also teaching an intro to Derwents in the morning!  You can find more information here!! 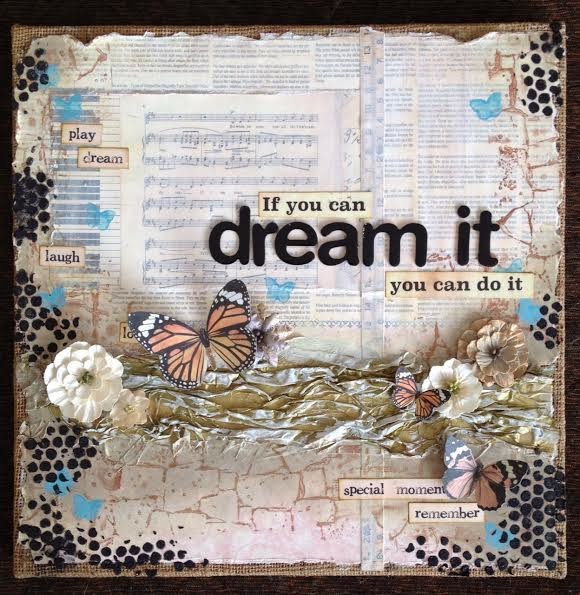 I love mixed media.  Here is a 12"x12" canvas that I created with a ton of fun products, Prima paper, tissue paper, Dreamweaver embossing paste, distress paints.....so happy!!  I am teaching this as a class at Scrappin' Great Deals on March 16!  Click here for details!!
Posted by Lori at 9:37 AM No comments:

Walk off the Earth

My hubby loves music. LOVES it.  Loves going to concerts, listens to CDs and on his Ipod as often as he can.  He recently took Malcolm to his first concert.  Downtown.  On a Friday night.  This made me very nervous.  Yes, it is downtown London, not downtown Detroit.  But still, stuff happens!  Fortunately, nothing happened, they had a great time and I spent the night fretting for naught.  Here is a layout I made for Malcolm.  They had VIP passes and got to meet the band "Walk Off The Earth", back stage.  Very exciting!! 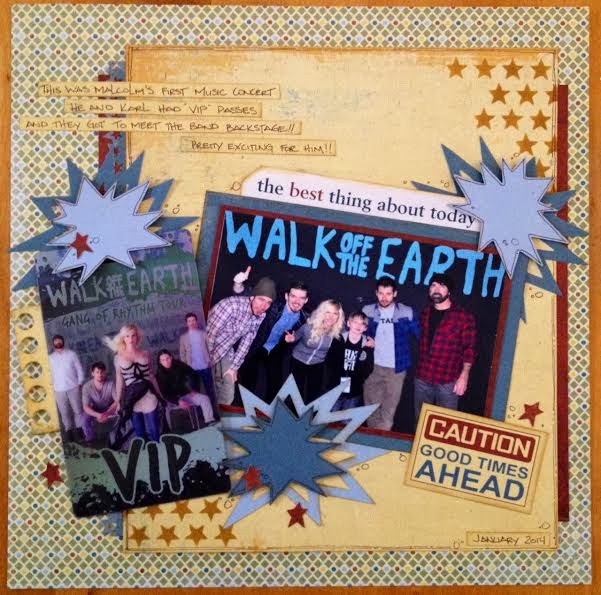 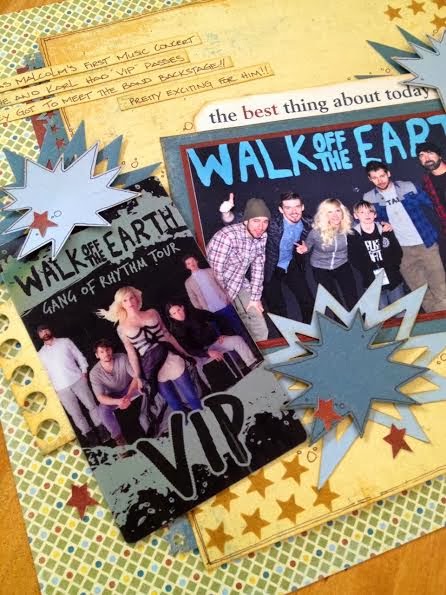 The layout is based on The Paper Loft's February Sketch challenge!!  Play along and you could be their guest designer for April 2014!!!  What a great opportunity!!!  More details HERE!!! And here is the sketch: 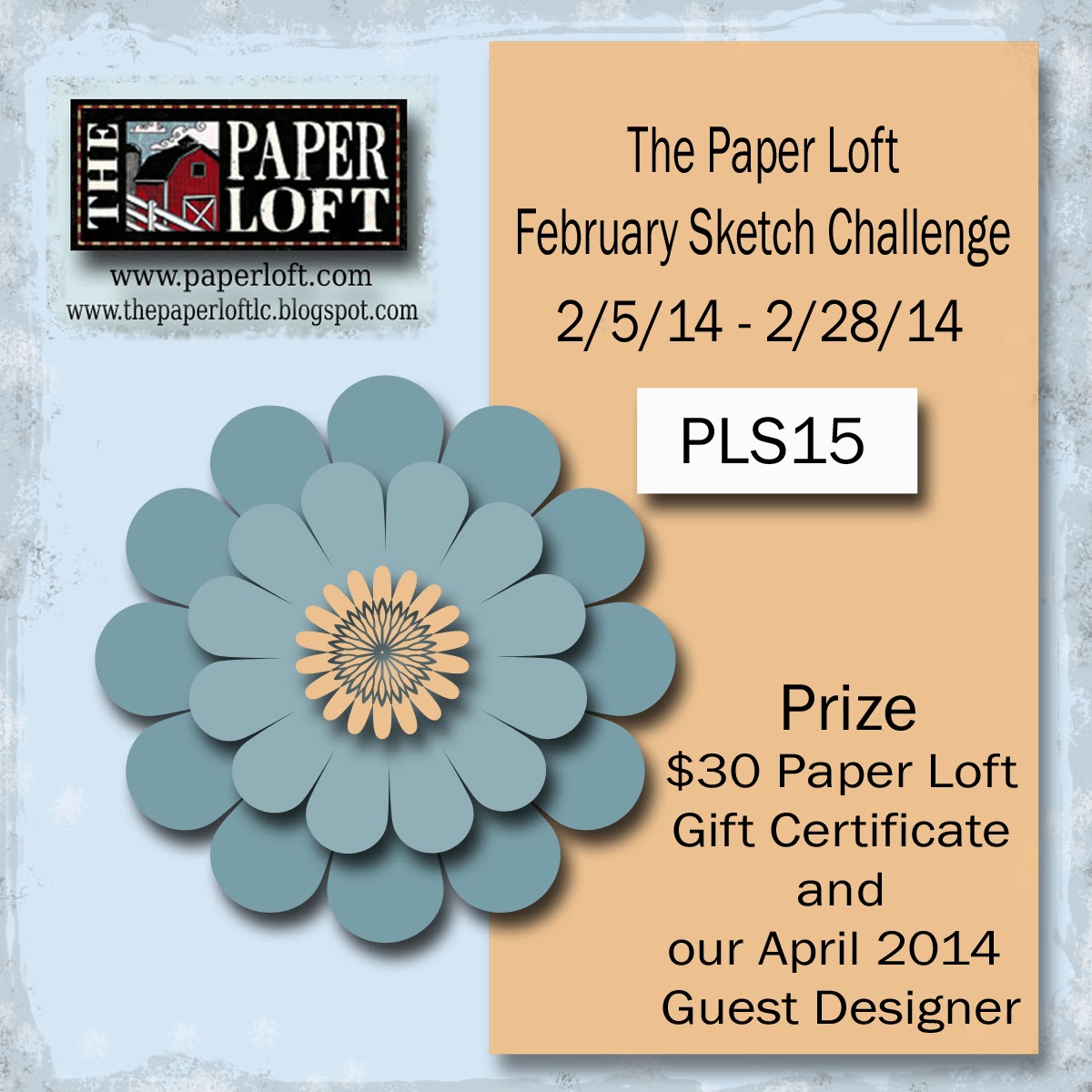 You have a few more days to submit your project!!  Good Luck!!

Lori
Hello and welcome!! I am married to a wonderful man, and have two incredible young boys. We also have a beagle, 2 orange tiger cats and 2 bunnies! It is quite the little petting zoo! I have always been "artsy", and was fortunate enough to turn my talent into a career as a landscape designer. I also have a HUGE addiction to scrapbooking, which is the reason for this blog - to showcase some of my creations! Have a great day! Thank you for following me!